Dogs are incredible and we love them so much that we are willing to do whatever it takes for them to live their best life. One devoted canine mom even went above and beyond, becoming a “pseudo guide dog” for her beloved Cocker Spaniel Molly, who suffered from hyper-mature cataracts as she got older.

But once her condition had progressed sufficiently, the removal surgery was absolutely life-changing for both Molly and her mother.

Molly came into her mother’s life when she was only 12 weeks old. The couple have been inseparable for 14 beautiful years, mostly enjoying their daily walks through a local nature reserve. But when Molly began to experience the disturbing effects of advancing cataracts, walking became incredibly dangerous. As cataracts develop, they envelop the lens of the eye and reduce vision, eventually leading to complete blindness.

“She just couldn’t get away from the lead anymore. I had to lead her through the house and up the stairs. In the end, she only stayed in one place because she was afraid of hitting things. All I heard every now and then was that screaming,’ said Michelle.

As her cataracts got worse, Molly really started to struggle in her daily life. The dog that once followed her mother around the house and took long walks daily suddenly became withdrawn and scared. But who can blame her after she accidentally falls down the stairs? In addition, she had an unpleasant encounter with the lake in the nature reserve that the couple often visited together.

Molly has always avoided water, so it was quite shocking to discover she fell into a lake unexpectedly! The poor pup was terrified and trembled as her mother rushed to get her out of the water. After that, Michelle fully committed to being Molly’s full-time guide. She went out of her way to help Molly find their way around their shared home.

“I didn’t try to move furniture or even put up a Christmas tree, but she ran right into walls. I mean, they don’t move,” said Michelle.

When Michelle initially took Molly to her vet, she was told to wait until her cataracts had progressed further before proceeding with the removal surgery. So until then, Michelle wanted to do everything she could to make Molly happy. So when she took Molly to the vet and they confirmed she was now suffering from hyper-mature cataracts, Michelle was relieved to know that her best furry friend could finally have this life-changing surgery.

Michelle was a little concerned that her older dog was going to have surgery, but her vet explained that she was a prime candidate. Plus, Molly’s mom was totally committed to doing everything she could to improve Molly’s remaining years. 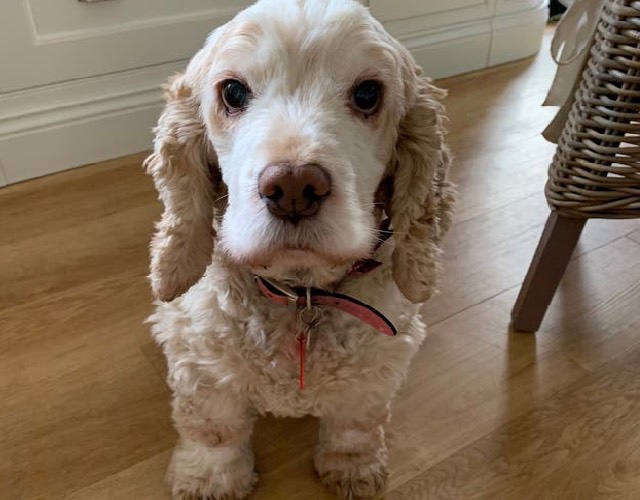 When Michelle arrived to pick up her best friend from surgery and her previously blind pup ran right over to her, she knew it had been a success! Michelle was so happy that she had followed her heart and committed herself completely to doing everything she could to help Molly live her best life. After being a loyal furry sidekick for 14 years, it was the least her mother could do to return her a favor.

We use cookies on our website to give you the most relevant experience by remembering your preferences and repeat visits. By clicking “Accept All”, you consent to the use of ALL the cookies. However, you may visit "Cookie Settings" to provide a controlled consent.
Cookie SettingsAccept All
Manage consent

This website uses cookies to improve your experience while you navigate through the website. Out of these, the cookies that are categorized as necessary are stored on your browser as they are essential for the working of basic functionalities of the website. We also use third-party cookies that help us analyze and understand how you use this website. These cookies will be stored in your browser only with your consent. You also have the option to opt-out of these cookies. But opting out of some of these cookies may affect your browsing experience.
Necessary Always Enabled
Necessary cookies are absolutely essential for the website to function properly. These cookies ensure basic functionalities and security features of the website, anonymously.
Functional
Functional cookies help to perform certain functionalities like sharing the content of the website on social media platforms, collect feedbacks, and other third-party features.
Performance
Performance cookies are used to understand and analyze the key performance indexes of the website which helps in delivering a better user experience for the visitors.
Analytics
Analytical cookies are used to understand how visitors interact with the website. These cookies help provide information on metrics the number of visitors, bounce rate, traffic source, etc.
Advertisement
Advertisement cookies are used to provide visitors with relevant ads and marketing campaigns. These cookies track visitors across websites and collect information to provide customized ads.
Others
Other uncategorized cookies are those that are being analyzed and have not been classified into a category as yet.
SAVE & ACCEPT